Thank you to everyone who completed the FishPal questionnaire and for your feedback. There were over 8,000 comments which will be used to shape the future as we move into a new chapter of investment as a result of the acquisition of the company by SpeedyBooker.

Everyone who completed the survey was put into a prize draw to win a £100 FishPal Gift Voucher. The winner of the voucher is Mr Paul Webster, congratulations.

Every week fisheries are adding availability onto FishPal. If you would like to be one of the first to be emailed when availability is live on the site please sign up for an alert.

Tom Carter After working with FishPal for over 10 years Tom has decided to move on and secured a new role on the river Tweed. We wish Tom all the best for his future and a huge thanks for his contribution to the success of FishPal. 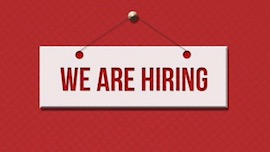 FishPal is looking for a Sales & Support Executive to join the team.

This exciting role will include managing existing fisheries, recruiting new fisheries, customer and marketing support. If you have a passion for, and knowledge of, fly fishing - read more.

Please send your application by email to: [email protected] stating reference: "FishPal Sales & Support Executive" in the email title as soon as possible. Please include your CV and a short covering letter - read more. 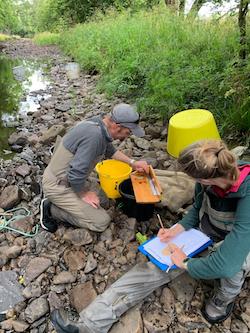 After a long period of low flows, and at times high water temperatures, heavy rain finally arrived. The Newton Stewart Angling Association (NSAA) beat on the lower Cree fished very well during the rise with an impressive eighteen salmon recorded by their anglers, up to 11lb. The Galloway Estates beat also caught a salmon and on the Bladnoch the Clugston Estate beat caught a salmon as the river rose. Five sea trout were also reported from the NSAA water. Find Fishing.

Congratulations to Kenny Galt on his new role at the Galloway Fisheries Trust. Kenny is a very experienced biologist, having spent sixteen years at the Tweed Foundation as their 'Trout and Grayling Biologist'. 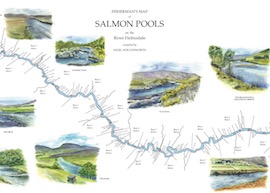 Fishing Maps have launched their latest maps, the River Helmsdale and the Welsh Dee.

The River Helmsdale is one of the most productive salmon rivers in the north of Scotland. Catch statistics are not widely publicised but it was once reported that one top beat alone had nearly six hundred salmon for the season, with ninety four to two rods in a week - view Helmsdale map.

You can find more UK maps including the Dee, Tay, Spey, Tweed, Kyle of Sutherland , Brora, Yorkshire Ure and many more. 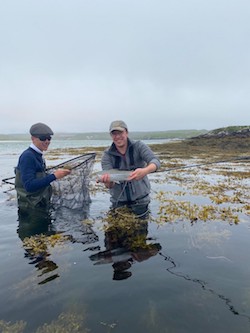 A couple of days rain provided catchments in North Harris and Uig with a much needed rise in water levels allowing fish to run the rivers in these areas and access the lochs. Grimersta also saw a 3" rise in water levels provided by Loch Langabhat which should allow fish to migrate upstream through the main chain of lochs - read more. 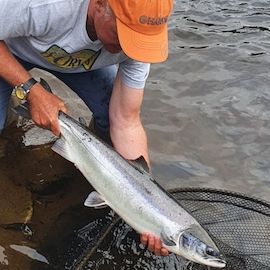 More success at Cargill on Tuesday.

Despite the unsettled water towards the end of the week, there were some stunning salmon landed from the river during the first week of August including fish weighing around the magical twenty pounds mark - read more.

At Lower Kinnaird, there was a magnificent twenty pounder caught on the fly on Thursday. The fish was caught from the Junction Pool on a Sunray Shadow. On Tuesday Mr Bleasdale fishing Ballathie landed a magnificent sea liced twenty pounder which put up a memorable fight - read more.

Simon Furniss and his very capable team have taken over the management of the Fishponds Beat in recent weeks, which is great news for anglers looking to fish on the lower river.

If we get some settled water conditions in the upcoming days, there is a chance of some good sport to be had, especially after the recent lift in water - find Tay fishing.

Murthly 2 - Enjoyable day on a very well kept beat which is run superbly well by Tony. He is a great ghillie who is very knowledgeable and only too keen to help and offer advice.
Dalguise - First time on the Tay, ghillie was fantastic. Fish seen and had every chance of catching. The beat is lovely and we will be going back later this season.
Waulkmill - Harry is an excellent ghillie and the beat is one of the best on the lower Tay. 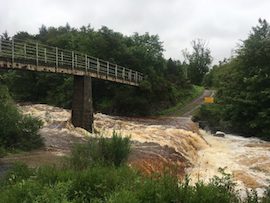 The project will remove the deteriorating Haugh Head Ford near Wooler and its associated check weirs, thereby reconnecting 22 km of the Wooler Water to the rest of the Tweed catchment - read more.

Nominations are now open for the annual Tweed Forum River Champion Award. If you know anyone with an outstanding commitment to preserving and enhancing the River Tweed and its surroundings - read more. 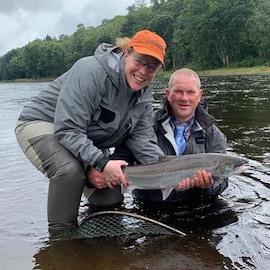 Around one hundred and fifty salmon were caught from as far up as Crathie, down to Ardoe and quite a few anglers caught their ‘first ever' salmon. The week started well with forty nine fish reported on Monday, just as river levels had dropped back down low after the previous week's rise - read more.

This coming week is looking promising too, with rain around the early part of the week, and warm but not too hot conditions. Find Dee fishing.

Birse - A very good day with Bob Booth standing in for Drew. Rising water and a first grilse for Kate at 4lb, using a left hand up single! After lunch and a rising river, a 6lb sea trout caught above the bottom pool using a 10ft rod. Bob was welcoming and fun and knew the beat very well. We will be back.

Tilbouries - Ghillie always willing to give help on tackle choice, casting advice and to point out best areas to concentrate fishing effort. 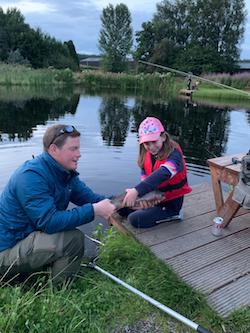 Fly Fish 50 is an initiative developed as part of the Scottish Anglers National Development Strategy to provide an easy route for non anglers & beginners to get an introduction into the world of fly fishing.

Anglers of all ages have enjoyed taster days and courses held at Raemoir Trout Fishery and Loch Insch Fishery. Events for September include introduction to salmon fishing and a ladies day on the River Dee. For more information please visit Fly Fish 50. 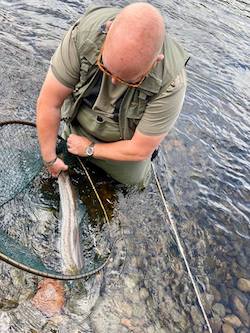 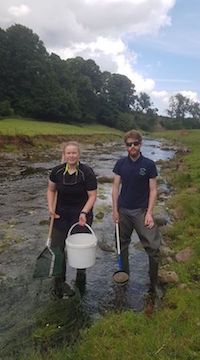 With recent staff changes at the Tweed Foundation - Kenny moving to Galloway and Ronald retiring, both of whom we wish the very best too, the Tweed Foundation welcome two replacements in the form of Suzanne Taylor who has just graduated from Aberdeen University and Jonny Archer who is just finishing off his MRes at Glasgow. Both are helping out with the electro-fishing on Tweed this summer.

Glenormiston - Douglas the ghillie was extremely responsive and helpful, it made a huge difference to our day.

Pedwell - The ghillie, Peter Lee, went above and beyond in assisting me as an inexperienced rod, even helping with casting tuition. I couldn't have hoped for more, and this all led to me having a very enjoyable day at Pedwell. This beat is highly recommended.

Anglers travelled from across the region for the event.

Robson Green was guest of honour at the North East Fly Casting Club open day on Dilston Beat at the weekend. 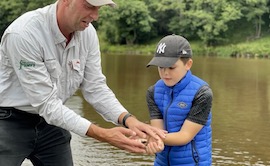 It was good to see fish in the pools on Dilston Beat. The splashes from fish jumping certainly interrupted many a conversation during the day. If you would like to fish Dilston there is limited availability until the end of the season. 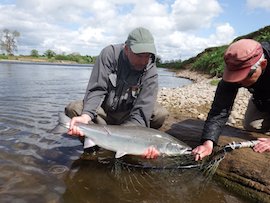 Cumbrian River Reporter Glyn Freeman Casting Instructor with one of his fishing courses.

Cumbrian Reporter Glyn Freeman reports "8th August, water level is now sitting at eight inches with a slight rise and colour. I would think that there will be quite a few to be reported with these conditions" - read more.

If you would like to fish the Cumbria there are permits for salmon and wild brown trout online - find fishing.

Gordon Castle and Brae Water Ghillie, David Buley reported that eighty seven fish had been caught in total on the beats. A great start to the week with great catches of very fresh fish, albeit the bulk of these were grilse but a few salmon were in the mix up to 20lb in weight - read more.