With most of the country affected by Storm Darcy, I'm grateful to be sitting at my computer screen in the warmth writing this weeks newsletter.

This week we have fishing news for the river's Tay, Tweed, Dee, Spey, Tyne and we travel to Iceland to find out more about fishing the River Sog.

Thank you to everyone using the Help Desk. We appreciate that some of you would like to speak to us instead of writing a message, the office phone line is open Monday to Friday from 1pm till 2pm on 01573 470612. 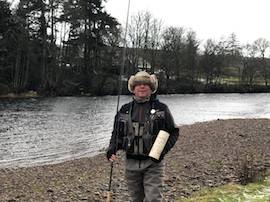 John Martin with a bottle of single malt from the Dee Board for landing the first fish of the Dee 2021 Season on Lower Crathes & West Durris.

The season got underway last Monday, and it was a relief to be back fishing again. It was a very different opening day without the ceremony held at Banchory; we were also without the wider Dee family as travel restrictions prevented many of our rods from travelling and celebrating the new season with us. Hopefully, it won't be too long before we are welcoming everyone back to Deeside.

The weather was cold, and we had real old school February conditions, which makes fishing at this time of year so special. Undeterred, and well wrapped up, the rods ventured out and we waited eagerly to hear reports of the first fish - read more. 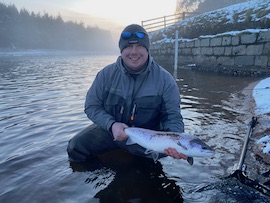 It wasn't until the afternoon that the news came. John Martin landed an 8lbr at Lower Crathes and West Durris on a Black & Yellow, which I understand was the first fish in Scotland. Shortly afterwards, Craig Fleming landed a 7lbr at Park, also on a Black and Yellow. Find Fishing. 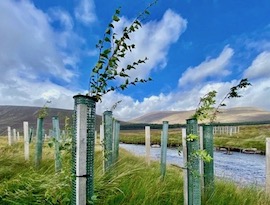 It's Valentine's Day on Sunday and what better way to say I love you, than with a bouquet of trees from the River Dee Trust?

As part of the Trust's work to restore the catchment, your trees will be planted where they are most needed in upper reaches of the Dee and its tributaries to provide shade and nutrients. Sponsor a tree. 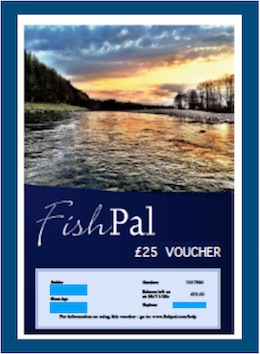 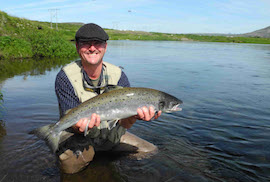 The river Sog is the largest freshwater river in Iceland

If you are longing to go salmon fishing in Iceland but have always dismissed the idea as too expensive, probably having read about the elite destinations frequented by the likes of Prince Charles and Eric Clapton, then read on. FishIceland is currently offering a fantastic package in 2021 with fishing and accommodation from Eur 490 per day/rod during July and August - read more.

The river is easily accessible, and is less than an hour by car from Reykjavik - read more.

Jon Sigurdsson can also advise you on places to stay whilst in the capital, including guided fishing for all species. For more information please contact Jon via email [email protected] or telephone +354 899 4247. 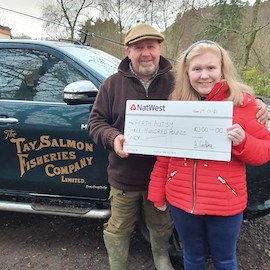 Cargill Beat David Godfrey and his daughter Grace raised £300 for Perth Autism Support by selling lures they made during lockdown.

As we move through February more fresh fish will be entering the river, which increases the chances of making contact with that elusive silver tourist. So surely it won't be too long before the first fish is landed.

The river is hardly being fished due to pandemic restrictions allowing only local anglers to wet a line and when you couple this with the inclement weather, it's easy to see why rivers like the Dee and Tweed have produced fresh fish before the Tay this season. Some of the anglers that did wet a line last week got their rods bent with kelts and baggots but the first fish of the season still remains elusive. Hopefully, we will not have long to wait now - read more. 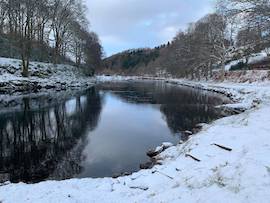 There is a chance of a fresh springer just about anywhere next week, but in the current cold conditions, the lower or middle river might be the best bet - find fishing.

Two weeks have become available on Rothes and Aikenway in August and September. The beat fishes six rods per day and comes with two ghillies and the fabulous Kinermony lodge.

The water offers a mixture of boat and wading on one of the top beats on the river Spey for fishing and catches.

Kinermony Lodge is situated above the river, just south of Aberlour and can accommodate all six rods with wives/partners. Prices start from £180 per rod per day including lodge - read more. 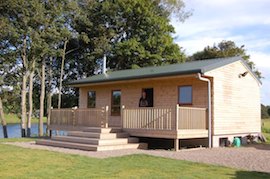 A rarely available opportunity for an experienced and enthusiastic ghillie.

Scone Estates is seeking an experienced fishing ghillie to provide a professional ghillie service on Fishponds beat, over the 2021 summer season (dates to be finalised but likely May to October 2021). The beat saw catch returns of 184 salmon & grilse in 2021 and has the benefit of a well appointed, purpose built, fishing hut - read more.

If you would like an informal chat about the role please call the estate on 01738 554920. Please see the Scone Palace website for a detailed job description.

1st February. A Service of Blessing for the season took place at 8.00am at Pedwell Landing in Norham. In the past, the Vicar of Norham said prayers of blessing at midnight, part of the tradition was that, if a fish were caught during the first casting of the nets, then it was given to the Vicar! 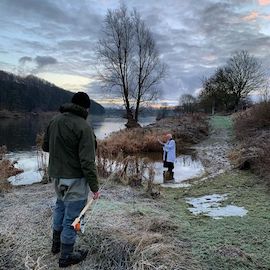 The tradition was re-started about ten years ago, at the instigation of local anglers. The prayers have been adapted slightly to take account of the fact that net fishing has been replaced by line fishing, and to incorporate a blessing of the local ecology, as well as human activity.

A variety of people usually attend, including those who make their living from the river, local residents, anglers and visitors. The service reminds us of our dependence on the bounty of nature, and on each other. It also reminds us of the continuity of ages, as the river flows from the past into the future. It brings us together in a new tradition, that helps to build up community life in Norham.

1st February. Dryburgh Upper, a quieter affair than normal on the beat. Ted Innes Ker had the first cast and gave an offering of the amber nectar to the salmon gods. Fishing being allowed as a form of exercise or mental well-being, we are open to very local anglers only.

Bemersyde beat. What a beautiful day: two foot six on the gauge and clear. Local angler Colin Chisholm enjoyed the first cast in the Boat Pool. Ian and his team look forward to seeing you all in due course but for now, fishing is for locals only.

Upper North Wark. Beautiful morning for the opening of the 2021 season and not the same without our regular opening day rods due to the restrictions. The river was still carrying a bit of colour and about 2ft 5" on the gauge. 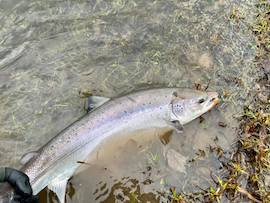 First salmon of 2021 was caught on Junction Beat.

2nd February. With guests unable to travel to Kelso, Junction boatman Gavin Brown had a cast with a newly designed fly created during the close season. Within two hours he had caught three springers on it at 7 / 10 / 12lbs. Whilst he was playing his third fish Pud Murray was playing his first of the day at 12lb.

Gavin said "The river was running crystal clear, you could see about 6 to 7 feet down. Temperature wise it was cold with an easterly/south easterly upstream wind".

This is the first fish of the 2021 season caught on Tweed. Congratulations Gavin. 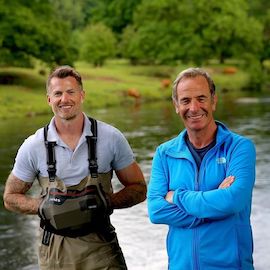 How much do you know about Hadrian's Wall? Chances are those who tune in to Robson Green: Walking Coast to Coast will come away having learned a few gems. The presenter is charting its history by following the 84-mile path for a new three-part series on Channel 5 - watch series.

Along the way Robson meets "quirky characters, visit nearby landmarks and take in dramatic scenery across a landscape rich in history."

He caught up with his fishing buddy James Stokoe and spent a few enjoyable hours fishing the river Tyne - watch.

This season there have been no reports of fresh fish as yet, though the river has been lightly fished since it opened on the 1st February. Find Fishing. 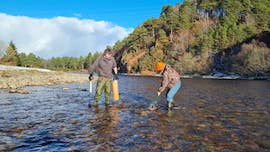 Spey Fishery Board out on the river planting the first of the eyed ova into artificial redds, Monday 8th February.

The usual excitement and opening ceremony at Aberlour will be totally different this year with only local anglers able to get out and celebrate the Spey opening - so many frustrated anglers who will have to wait a bit longer to wet a line. Conditions are cold to say the least and grue is is in the river, which will make it particularly difficult for those lucky enough to be out. Tuesday 9th February, it was minus 14 degrees and forecasters say it might get colder still - not for the faint hearted salmon fishing in Scotland!

Diageo has completed a £550,000 weir and fish pass near Dufftown to help boost the sustainability of salmon and trout stocks in Moray.

Brian Shaw, the Board's senior biologist, said "The number of spawning redds counted above the weir last autumn was the highest we have recorded. The fish pass allows a range of species to migrate upstream, and downstream, including eels." - read more.