Our thoughts remain with families and friends who have been affected by Coronavirus and to the amazing NHS and all key workers keeping our day to day lives as normal as possible. We continue to be in lock down in Scotland. First Minister Nicola Sturgeon today (7 May) updated the people of Scotland and confirmed that the country will not yet be lifting lockdown.

It is interesting to note that the UK government looks likely to announce this coming Sunday plans to start the release from lock down.

There are a growing number of organisations lobbying the government right now citing why fishing is good for both physical and mental health as well as a solo sport.

Newspapers have increased their coverage of angling. Anglers have also been writing to their local MP's and MSP using the template letter we have added to the FishPal site.

This weeks newsletter has a VE day theme. While celebrations have been cancelled due to lockdown, there are still many ways we can choose to remember this day which do not involve crowds and parties.

In a message broadcast to the nation, the then prime minister Winston Churchill announced: "Hostilities will end officially at one minute after midnight tonight, Tuesday the eighth of May. We may allow ourselves a brief period of rejoicing."

This Thursday at 8pm we encourage you to clap and honour the service and sacrifice of the Second World War generation as well as to thank the NHS and staff who have died saving others and the millions of key workers risking infection to man the frontline of the battle against Covid-19 happening today. 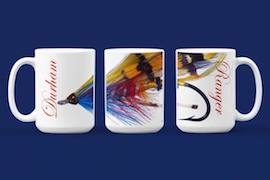 A new design has been added to Fishing Mugs. The Durham Ranger is one of the classic salmon flies. Kelson attributes the Durham Ranger to James Wright but a Mr. William Henderson who lived in the city of Durham seems a more likely candidate as originator of the pattern. The winging style with its golden pheasant tippet has remained popular and is still used for new fly designs today - read more.

The David Miller collection consists of designs depicting classic salmon flies of a bygone era. Each one is individually hand printed to ensure the colours remain sharp, vibrant and clear. They are microwave and dishwasher friendly - read more.

David and his team are able to offer a bespoke service which includes personalising mugs for larger orders. They are the perfect fishing gift. 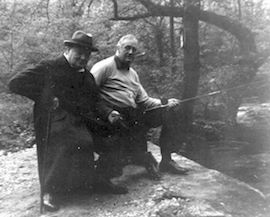 Churchill enjoyed fishing as a relaxation from affairs of state. In May 1943, the month of the Dambuster raids. Churchill had travelled to the US to address a meeting of Congress, but he also spent a weekend chatting to Roosevelt at the president's secret retreat in Maryland.

Churchill wrote in his War Memoirs "On Sunday the President wanted to fish in a stream which flowed through lovely woods. He was placed with great care by the side of a pool, and sought to entice the nimble and wily fish."

"I tried for some time myself at other spots. No fish were caught, but he seemed to enjoy it very much, and was in great spirits for the rest of the day."

Despite Roosevelt disability, he clearly found fishing and being by water to be a great benefit to his health in what by any stretch of the imagination must have been a time of substantial stress. 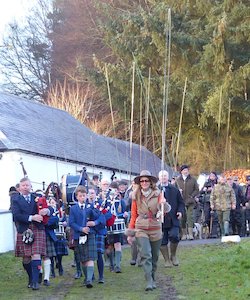 Claire Mercer Nairne leading anglers at the opening of the River Tay.

Champagne house Pol Roger from Epernay sends a magnum of champagne every year to Meikleour Fishing for the opening of the River Tay, commemorating a friendship sealed during the Second World War in enemy occupied France, where George Mercer Nairne of Meikleour (1912-1999) and members of the Pol Roger family worked for the Resistance movement in preparation for the Normandy battle.

Mr Crabtree Goes Fishing, created by author and angler Bernard Venables, this story was originally published in The Mirror newspaper in the 1940s.

One of the strip's most loved characters is Peter, who is introduced to angling by his dad and is taken on a series of angling adventures over the course of a year.

Venables extolled the Waltonian values of angling that were more common before the Second World War. (This was deliberate, as he wanted to help people overcome the horrors and hardships of the recent war through peaceful recreation with a fishing rod.) 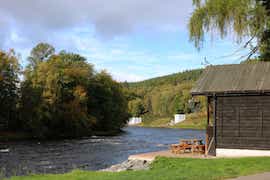 Cairnton on the River Dee.

In mid April 1944 General Eisenhower, Supreme Commander of the Allied Expeditionary Force, spent a few days in Banchory, travelling there in the private train which he used during the Second World War.

The General enjoyed a mini holiday while preparing for D-Day in June of that year. He went fly fishing at Cairnton on Friday 14 April with Captain Walter Bedell Smith where two salmon in the Grey Mare pool were caught using a silver grey fly.

There is no mention of Eisenhower in the book with a salmon, alas he must have had an unsuccessful day on the river - read more. 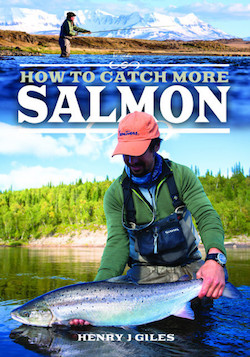 How to Catch more Salmon by Henry Giles is now available on ebook and kindle. This week we are giving you an opportunity to win one of three copies by answering this simple question.

Question: Which river did Henry Giles catch his first salmon on?

Email your answer to:- info@fishpal.com
Closing date 9am Monday 11th May 2020.

How to Catch More Salmon is about fishing according to the application of principles and practicalities that will not stop at a first salmon, but go on to catch more salmon, whether or not that is your final destination. Find out more about Henry Giles and his first salmon in 1981 - read more.

We will be announcing the three Winners on FishPal's Facebook Live, Monday 11th May at 11am. 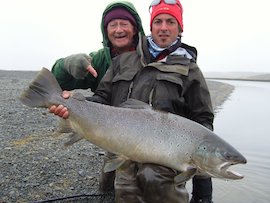 Paul Young is a guest on Monday 11th May.

Every day during lockdown FishPal has hosted a mid morning live session on Facebook at 11am. Guests until Tuesday 11th May are Hywel Morgan, Scott Mackenzie, Ian Gordon and Paul Young.

If you would like to watch them again please visit FishPal's Youtube channel where we will get them uploaded, meantime they are still available on the Facebook page.

Operation Fish was the World War II evacuation of British wealth from the UK to Canada. It was the biggest known movement of wealth in history - read more. 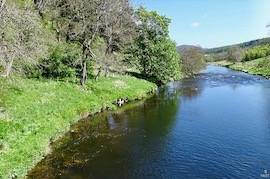 Castle Forbes on the Aberdeenshire Don.

It is known that Prime Minister Neville Chamberlain regularly fished at Castle Forbes and it was during one such visit in April 1939 that his trip was cut short by Italy's Benito Mussolini launching an attack on Albania.

He returned to London the day after Italy invaded Albania, and five days before Parliament was recalled to hear his account of the invasion and his important announcement of British (and French) guarantees to Greece and Romania - read more.

Hardy rod makers made Chamberlain a fishing rod. James Hardy tells the story from a special extra scene originally filmed for The Lost World of Mr Hardy but eventually not used in the final film - watch.

Every family was touched by the second world war, let's remember our veterans and the family that lost their lives during and after the conflict. Just because we can't meet, doesn't mean we can't remember them and celebrate their existence. We should also remember those in the Far East who had another few months of conflict before they could return.