In this week's newsletter.

More availability for late Spring, Summer and Autumn has now been added to the FishPal site.

This month our featured estate is Stenton nestled on the river Tay near Dunkeld. The house is now available to let and stands in a magnificent position overlooking the river and its own salmon fishing beat. 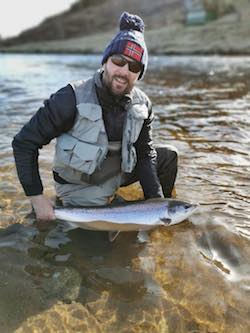 We have a fishing course with World Spey casting champion Andrew Toft, who is undoubtably ranked in the top ten best casting instructors in the world.

Orton Water on the river Spey, one of Scotland's most famous salmon fishing rivers, has added availability with accommodation. Orton water is one of the more prolific beats on the river in numbers of fish caught and size.

Ali Hutchens is hosting a fully guided and inclusive fishing excursion to Newfoundland during its prime salmon season in July. If you are looking for something different this truly is a fishing adventure!

Mark attended Making Salmon Conservation a National Priority at the Scottish Parliament in January. A report was produced and sent out earlier this week which we thought you would like to read.

We have received more feedback from customers who advertised their timeshares for sale on FishPal. Week one on the Spey has just been sold and the buyer was a FishPal customer. If you are selling a timeshare and would like to know more about how we can advertise it, please contact us for more information.

Enjoy this week's newsletter and keep sending in your feedback. 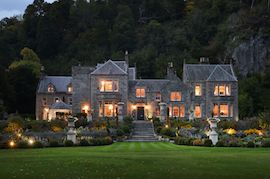 Stenton House stands in a magnificent position overlooking its own stretch of salmon fishing on the River Tay. The house is surrounded by private gardens and grounds which have been carefully designed and meticulously maintained, creating the perfect environment and enhance the superb backdrop of the river and rolling countryside beyond.

The house has been recently refurbished and offers extremely comfortable accommodation for up to 14 guests and is the perfect venue for fishing parties, shooting parties or for a special family gathering. 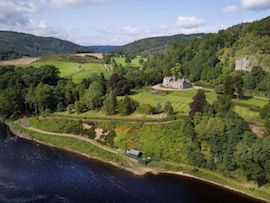 Stenton Beat is one of the most picturesque salmon beats on the River Tay with eight superb pools offering the fly angler sport the whole length. It fishes well in all heights of water, from late spring and summer into the autumn. Stenton marches with the Glendelvine water where Miss Ballantine caught the British record salmon of 64 lbs. A total of twelve casts of the original fish were produced and one of these is on display in Stenton House.

For more information and availability of Stenton house please contact George Goldsmith on 0131 476 6500.

If you would like to fish Stenton Beat, salmon permits can be purchased through FishPal. Please visit their fishery page for more information and their latest availability.

If you are heading to this weekends Glasgow Angling Centre's open weekend, then be sure to look up the team from FishPal who will be onsite and would be more than happy to chat to you about all your fishing needs.

This year's event takes place this Friday 6th until Sunday 8th March and is promising to be a cracker.

Come and meet some of the country's best-known anglers and brands including Scottish TV personality Paul Young, Hardy Fishing, MacKenzie, Abu Garcia and Guideline. The RNLI are offering a free lifejacket check. Magazine offers include Trout & Salmon magazine. There is also fly tying with some of the UK's best tyers and free fly casting tuition with SGAIC.

These are just a few of the top names and brands, mostly every tackle brand in the industry will be in attendance. They will be available for you to ask questions and to get help with your fishing. It's a great free day out. 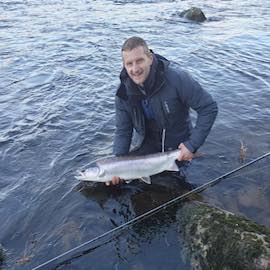 As we approach March and with snow laying thick and fast on the ground, the anticipation for those lucky enough to be out fishing the Upper Dee is at its highest level, as that means beats from above Aboyne are now open for business.

My thoughts are turning to whether there might just be a few springers eager for the take on the Upper reaches of the Dee - read more.

Mark attended the Making Salmon Conservation a National Priority, a roundtable discussion in the Scottish Parliament, sponsored by Michelle Ballantyne MSP. Enclosed is a link to read their report. 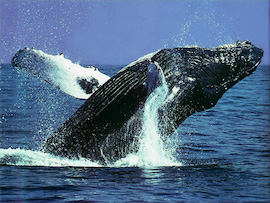 Ali Hutchens is hosting a fully guided and inclusive fishing excursion to Newfoundland during its prime salmon season from 19th to 27th July. This is the first time anyone from the UK will have fished this private water and you will be fishing in areas where Atlantic salmon and Brook trout have not seen a fly cast over them.

It is a wild and untouched place in one of the most prolific areas on the planet. This truly is a fishing adventure! Read more. 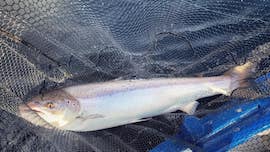 There were some stunning spring salmon caught from the Tay system last week and hopefully this is a sign of things to come as we head into March and the meteorological spring. Anglers were able to do some meaningful fishing and the pools were becoming more defined on many beats; and as if by magic, salmon started to get caught. Indeed, Wednesday turned out to be a productive day on the system for late February with a total of five fish landed.

Meikleour & Upper Islamouth anglers had an enjoyable day last Wednesday. At first, a fresh fish was hooked and played out and came alongside the boat before disaster struck when the springer made a successful bid for freedom. Thankfully, shortly afterwards a fine sixteen pounder was landed after a terrific fight. 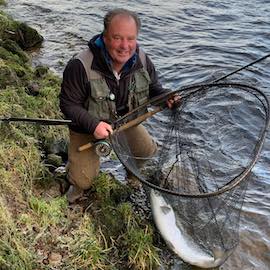 Robert White, ghillie on the Stanley beats had a day to remember on Wednesday. Bob was fly fishing the Back Dam Pool when his line tightened and after numerous powerful runs he landed a sixteen pounder. He went on to catch another fish weighing around fifteen pounds.

Anne visited Kate Fleming Tackle Shop earlier this month to find out what flies to use this Spring - watch video. 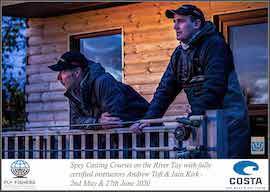 Join World Spey casting champion Andrew Toft (AAPGAI, FFF THCI Master Instructor) and Iain Kirk (SGAIC) on their one day courses this May and June on FishPonds Beat, River Tay. Both days are aimed at complete beginners and those who are keen to enhance their casting technique and skills.

The course is tailored to suit each individual's requirements and aspirations. You may have fished for trout for many years and wish to try salmon fishing but are not sure where to start, this is the course for you? 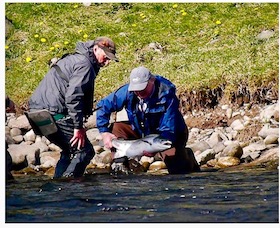 The lack of reports the last couple of weeks have unfortunately not been because of holidays in sunnier climates but a never ending barrage of rain and wind which has kept the river pretty much unfishable for the best part of three weeks. On a positive note there have been fish reported when anglers were able to go fishing. 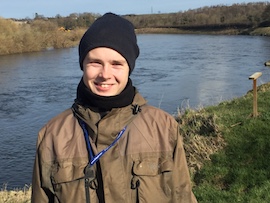 Dean is the new boatman on West Learmouth

We would all like to wish Dean Cockburn the very best as he takes up the position of Head Ghillie on the West Learmouth beat. Dean served his apprenticeship on Ladykirk estate where he rose to the ranks of second boatman. His customer care and feedback from anglers fishing Ladykirk has been excellent. If you would like to fish West Learmouth beat and any beats on the river, please give Tom a call in the office on 01573 470612.

Tom Carter joined in the Great Borders River Clean at the weekend. His local event at Denholm meet was cancelled, due to a high water and very wet banks. So he walked from Denholm to Ancrum and did a solo clean up. He walked five miles, collected two full bags of plastic and noticed quite a few large barriers that had come down from Hawick in the floods. He said it did feel good to be out in the fresh air and the knowledge that he was walking towards a pub at the end!