The office phone lines are now open from 10am to 2pm Monday to Friday and at all other times please contact the FishPal team via the Help Centre. You can find the latest availability added to FishPal here. FishPal are catching up with Paul Young on Tuesday 18th May at 7pm to celebrate the launch of every "Hooked on Fishing" shows being re-released. The digitally remastered programmes, 108 of them can now be watched on Fishing TV.

The week started with the showers we expected in April deferred into May! But the rain was welcome to lift the river levels and please all the gardeners as well as the anglers. There was still ground frost on a few evenings and so the water temperature was quite low in the early part of the week, but over the weekend the sun came out and so did the fish. We had just short of 50 fish this week on 21 beats from Park right up to Crathie - read more.

This coming week looks to be a good bit warmer than last with sunshine and blustery showers and winds becoming warmer from the South West. For the latest availability on the river please visit - find Dee fishing.

Birse - "Great beat. We were both blown away by the new ghillie Drew, what an amazing asset for the beat, great attitude, endless energy, ideas and a pleasure to have his company for the day".

Little Blackhall & Inchamarlo - "Exceptional advice/enthusiasm/information from someone who knows exactly how to help a guest get the most from his day. He made my first visit to the beat a joy. I cannot recommend enough this beautiful, well managed/ghillied beat, on the Dee. Thank you to all at Fishpal for the great service you provide. Booking/accessesing fishing made wonderfully simple and easy by great staff and effective website".

Park - "Keith was very attentive and shared his vast knowledge about the beat with us. Nothing was a problem to him. First class ghillie." 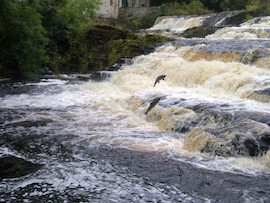 A selection of weeks have become available from April until October on The Forss House Fishings Timeshare by the River Thurso, Caithness. The water is divided into four two-rod beats, two below the Forss Falls, which can be fished all season, and two above the Falls, which are only fishable when water temperatures enable fish to ascend the Falls, normally by the end of April. There are twenty-nine named pools, which are capable of producing fish in a variety of water levels. Prices start from £3,500 per rod - read more. I'm sure many of the anglers out last week would have preferred a little warmth in their day; they had tough conditions at times – cold winds, snow, hail and a fluctuating river. But the rewards were still there to be had and some great fish were landed throughout the week, including these cracking sea trout - read more.

Reports from up and down the beats suggest there's been a good run of big sea trout into the system. On the salmon front, it would appear the average size is increasing – which is typical for May. Biggest of the week was a cracking 20+lber from Arndilly. Other beats also recording more double figure fish. As with previous weeks, many of these were sealiced or very fresh. Find Spey Fishing. 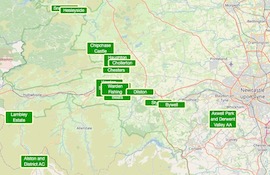 Catches have improved at the end of the week with some very fresh fish in the teens and twenties landed mainly by local rods in the Hexham area - read more.

Anglers wishing to fish the Tyne please follow this link for the latest fishing available and places to stay.

The latest guidance on Conservation Angling for Salmon on the Tyne (CAST) can be found here and has now been adopted by many Tyne beats and syndicates.

Lee Ross with one of the eight fish caught on the Whiteadder.

One hundred and fifty two salmon and fifteen sea trout were landed for the week with the best fish a 24lb Salmon caught on the Junction beat, One hundred and twenty nine of these fish were caught from Thursday to Saturday. Some good catches were made on individual days with BDAA Whiteadder landing eight on Thursday, Lower Floors eight on Friday and Junction ten on Thursday, eight on Friday and seven on Saturday, also on Saturday Sprouston landed ten - read more.

Above Kelso forty fish were reported, between Kelso and Coldstream seventy five and below Coldstream 20 were reported. With the best fishing being on the Junction beat where twenty seven springers were landed. Sprouston also had a good week landing twenty - find Tweed fishing.

Whiteadder - "A well attended angling club which can at times be busy and at other times very quiet".

Pedwell - "The ghillie was very informative and helped to improve my casting".

Bemersyde - "Despite low water and then a very wet afternoon, it was an enjoyable days fishing made better by an excellent ghillie service from Ian Farr". 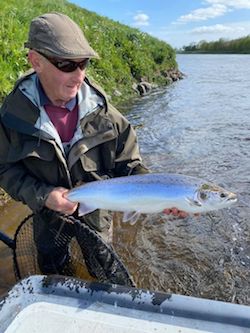 Caught on the fly on Dunkeld Fishing.

Despite the cold weather and at times challenging conditions, there were some fine spring salmon were caught from the Tay system last week. On the upper river, both Bolfracks beats produced fish during the week including one weighing sixteen pounds. The Edradynate Beat produced a fish on Tuesday and there was a nice springer caught at Upper Farleyer on Saturday - read more.

Lower Kinnaird has fished well recently and there were a couple more fish caught from the beat during the first half of the week as well as one on Thursday. On Friday a magnificent twenty three pounder was caught from Lower Kinnaird.

James Broomhill 20lb fish on the fly from Dalmarnock Beat. The fish is still in the water, the fly was removed and his fish released by Colin.

There was a fish caught on the fly at Newtyle on Wednesday. On Thursday there were two more fish caught from the beat including a fine ten pounder for Mr Gordon Bell. On Saturday Mr Alan King landed a stunning sea liced fourteen pounder from the Fiddlers - read more. Anglers eager to cast a line on the Tay, permits start from a little as £8 for a day fishing - find fishing.

Benchil - "We met Bob, what a lovely man. We will definitely be back to fish the beat again."

Newtyle Beat - "David was very welcoming and knowledgeable about the beat and we will definitely be coming back. A great day despite the weather and not catching a fish".

Ballathie - "Another great day with Garry and George." Join The Atlantic Salmon Trust on Monday, 24th May at 7pm for their Restoring Wild Salmon Event, broadcasting live from The Macallan Estate.

The evening will feature the premier of a new short film, featuring Robson Green and Jim Murray: "Roadtrip to Discovery" - register here.

Pete Cairns from Scotland's The Big Picture will discuss rivers and rewilding. A Q&A session with a panel of experts: Mark Bilsby, CEO of the Atlantic Salmon Trust, Peter Landale, Ambassador for the Missing Salmon Alliance and Dr Colin Bull, Principal Investigator of the Likely Suspects Framework read more.

To close the event, the Atlantic Salmon Trust will announce the winner of their prize draw trip to East Ranga, Iceland.

A rare opportunity to purchase a five-rod lease on the renowned Lower Scone beat of the Tay. This prime mid-September week (week 36) has a 10 year beat average of 271 salmon and 18 sea trout. The ten-year, week average is 11 salmon. The beat benefits from an experienced Ghillie, boats and two fishing huts along with good access with parking - read more.